An Evening of Brass Music at the Wesley Centre, Maltby 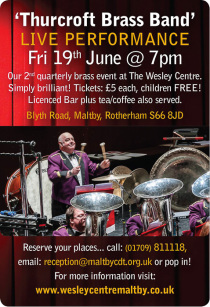 Thurcroft Welfare Band were delighted to be invited to play at the Wesley Centre at Maltby on Friday 19th june 2015. This was part of a regular quarterly brass program now being put on by the Wesley Centre. The centre has previously hosted Dronfield in March and are due to be entertained by Dodworth in September.

The band thoroughly entertained the audience with an electic mixture of hymns, marches and music from films and shows. The band also performed an original piece, 'The Spirit Within' by young composer Ben Hollings. Ben who was a university comtemporary of MD Matt Wright, was in the audience  to hear the performance.