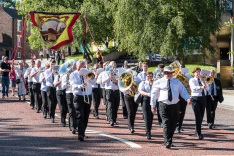 Thurcroft Welfare Band made an emotional return to the Durham Miners' Gala following the death last year of Jim Hartley. Jim fell ill at the Gala last year and died two weeks later. The band was honoured to include members of Jim's family when we again accompanied the Thornley Banner. During the march through the village Billy Middleton proposed a toast to absent friends and this was much appreciated by the band.

Following the outcome of the recent General Election this year's Gala was a huge event. Jeremey Corbyn was the main speaker with an estimated 200,000 people attending the Big Meeting.