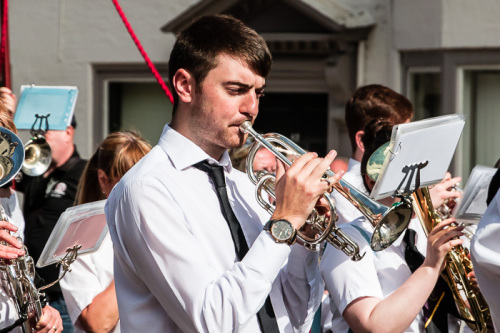 Matthew is a trumpet and cornet player from Doncaster. It was in 2001 at the age of 8 when Matthew first began learning the trumpet after being inspired at a concert. From here he went on to play in wind bands, jazz bands and orchestras such as the Doncaster Schools Symphonic Band and the Beechfield Youth Orchestra at Danum School Technology College (now known as Danum Academy) and Doncaster’s William Appleby Music Service.

Alongside his studies Matthew joined Hade Edge Band in 2012. This was his brass band debut as he was primarily a wind band and orchestral player.

In 2012 Matthew got involved with the Hade Edge Academy of Music alongside academy leader, Mr Simon Wood. Here he would provide instrumental tuition as well as participating and running rehearsals.

In 2014 he was part of the Huddersfield Marathon Band who marched the London Marathon in a world record time as well as raising over £68, 000 for the charity SENSE.

As well as Brass playing Matthew has been a keen singer since the age of 9 when he joined the Doncaster Minster Choir. In 2005 at the age of 10 he also became a member of a local Doncaster choir, The Danensian Choir. When singing with these choirs Matthew has sung in such venues as York Minster and Durham Cathedral.