Just a little bit of the history of Thurcroft Welfare Band

The band was formed by the Thurcroft Colliery Welfare Committee for the benefit of mineworkers at the colliery. We believe it started playing in the late 1940's as the first recorded contest appearance was in the Yorkshire and Humberside Brass Band Association Contest in 1949 when they were unplaced on J.A. Greenwood's "Pride of the Forest"

Other than George Sykes taking the band to the C.I.S.W.O. contest in the 1950s at Sheffield City Hall (>> read more), and Derek Johnstone taking the band to compete at Belle View in 1969 and 1970, little is really known about those early years, and it seems shortly after this the band folded and the instruments stored away and forgotten about. It may be that much of the written history of the band was lost during this period. In 1981 though, the hard work and persistence of Dennis Holling and a small group of players paid off and the band was reformed. Very little more is known of the contesting history of the band until 1988. In that year the band's name appeared once again in the Yorkshire Regional Contest, this time under the baton of Keith Croft.

The band has regularly attended the Y&H Regional Contest since 1988 under a number of conductors including : K. Croft; D. Johnstone; G. McKilvenna, D. Neil, D. Holling, M. Battersby, P. Chapman, P. Dickens, O. Wedgewood, A. White and Julie Holling. The best regional result recorded was as recent as 2009 where we were placed 2nd under Ken Vernon. This, of course, qualified the band to compete in the National Finals at Harrogate for the first time. A very proud moment indeed for the band ! 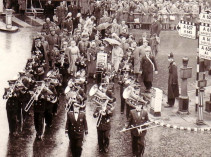 In 1996 under the baton of Martin Battersby the band went to compete in the 4th section National Mineworkers Contest at Blackpool. The test piece was 'The Malvern Suite' by Philip Sparke, and Thurcroft Welfare Band came away victorious. (This is still the best competition win to date!)

During the early 2000's the band again enjoyed competition success, this time under the baton Phil Dickens. In the Buxton Entertainment contest adjudicated by Roy Roe, which was open to 2nd, 3rd, and 4th section bands, the band was the best placed 4th section band finishing 5th overall. At the South Emsall Contest which comprised a march and test piece the band finished in second place. The test piece was Othello and band played the Arnhem march. Mike Samson was also awarded the trophy for the best soloist by adjudicator Chris Wormald. At the Rotherham District Entertainment contest adjudicated by Colin Hardy, the band won the 1st prize of £500.

With the demise of the pits, so went the Blackpool contest. Fortunately it has been superseded by the Butlins Mineworkers Open Music Festival at Skegness. Thurcroft Welfare Band has attended regularly since it's inauguration in 2003, the best finish being 3rd in 2010 with 4th in 2003, 2006, 2008. This contest has been very good for the band – our worst placing being 7th in 2005.

In January 2008 the Training Band was started to help and encourage anybody of any age, to learn a brass instrument and brass music. This has proved to be very successful. In 2009 they took the Junior Ensemble prize at Worksop Music Festival in their first ever public performance. They followed this up by retaining the prize in 2010 and again in 2012 (>> read more) ﻿

In July 2009 the band entered the inaugural 'Kiveton Park Music Festival' (for 3rd & 4th Section bands together with unregistered bands and training bands). Both the senior and training bands entered and were very well received. Our senior band winning 'Best Hymn Tune' and an overall 2nd place.

Every band needs a home! Thurcroft Welfare Band is no exception and in recent years has moved in to it's own band room at the top of West Street, Thurcroft.

Over the years, thousands of pounds has had to be earned to cover running costs, instruments and equipment. Having never had the 'comfort' of sponsorship, all the money needed has had to be raised by the band and its supporters. Thankfully, as 2009 closed, a number of grant applications were approved. This has allowed the band to commission a new march "Thurcroft Centenary March" by Darrol Barry, (to celebrate the sinking of the first pit shaft at Thurcroft in 1909), together with a new march for the training band called "100 not Out". The 2 commissioned pieces were integral to our first CD which was recorded in March 2010.

Further grants have allowed the band to purchase sorely needed new instruments and equipment. The first deliveries were made in January 2010.

We would love to be able to expand our knowledge of past events, contests, concerts etc. If you read this and can add anything at all please contact us by any means.

The photographs above are reproduced by kind permission of Fred Gething who had developed the Thurcroft Colliery Website. Please follow the link to find a facinating history of the colliery 1909 - 1992

We now welcome both adults and children into the training band. So if you fancy starting a new and rewarding hobby get in contact